Our hectic week in London was at its end so we organised a private car out to Heathrow to pick up our Peugeot, initially we were going to get the train but laziness won out so we opted to pay a bit extra for a driver. It was a lucky call as we heard on the radio whilst heading out that the train service wasn’t running to Heathrow due to a lack of drivers… Laziness pays off!!

We were dropped off by our driver and picked up our car for the next four and a half months, a brand new Peugeot 308. It has been great so far and does 1100km for every fifty pounds worth of fuel we put in which seems cheap, only thing is it is left hand drive which is a bit of an adjustment in the UK as I’m back driving on the left of the road. So far no dramas, a whole lot easier to drive around on the English motorways than in Crete!

Our first stop was Bicester Village, a small village consisting of luxury outlet stores, so that Jess could do some essential shopping before we headed out into the countryside. After a quick bit of shopping I left the outlets and headed into Bicester to try and find a pub to watch the football at, Manchester United was playing Tottenham in the first game of the Premier League season. Found a great pub that was starting to fill up so decided this was my local for the day and headed in, I made two fairly large mistakes in the first 5 minutes… Firstly I was an Australian, rookie mistake on the day that we were bowled out for nothing a second time to throw away the Ashes. Second mistake was walking into a pub called The White Hart and asking if they were showing “the Manchester game”, it happened to be a Tottenham fans pub. Obviously. I got completely annihilated with banter but fortunately got some back up in the form of Welsh Dave. Dave also copped a lot of banter for being Welsh but is a respected man in The Hart as he is mates with Gareth Bale. He jumped on my side for the match and we got the last laugh with United prevailing.

With the match over and required supplies procured we jumped in the car and headed for Fountains Abbey, out first heritage location as we headed North. 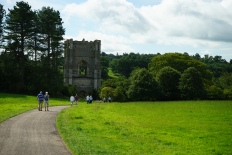 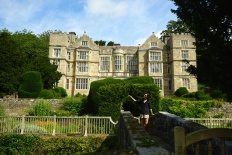 On arriving at Fountains Abbey we whipped out our National Trust memberships, a great gift from Ann Teesdale, and headed in. The lady on the gate was excited to see us as she got to dust off her special “Australian Members” stamp before ushering us through and into the estate. As you can see in the first picture above, the abbey seems to be somewhat of a couples spot, with everyone walking around the grounds in pairs. Our first stop was at the wildlife hide where we saw lots of different types of birds, unfortunately none of the elusive red squirrels that are becoming endangered in the UK! Next we visited the manor house, orchard and herb garden. Thats right, we went to the herb garden!

The Abbey itself was remarkably well preserved as were the grounds, visitors have full access so you can walk through the Abbey, climb the tunnels and explore the basement. The architecture and construction was very impressive both in scale and in the fact that it has survived so well throughout the centuries. As well as the Abbey and the Manor House the estate had a giant water garden, a church and a series of tunnels and follies to entertain guests that were all built centuries ago. 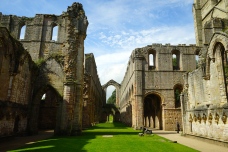 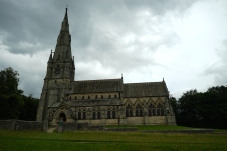 After our exploration we sat by the water and enjoyed some warm scones with strawberry jam and clotted cream and some cheesecake before jumping in the car and heading to Ossett for the night. Ossett was a nice little village but it did have that vibe that not heaps of tourists stop in there, when we went for dinner everyone in the restaurant knew each other and constantly stared at us and we were served by the manager all night as if VIP’s… Maybe won’t choose stopovers purely via geographical location in the future!

The next days mission was to explore the Teesdale region where Jess’s ancestors originated before heading out to Australia, we worked our way through the valley and along the River Tees until we came to Middleton-on-Teesdale, home of the Teesdale Hotel and the best lunch of the holiday so far. We arrived at 3:05 but they were luckily still doing Sunday lunch, Jess ordered the roast chicken with Yorkshire pudding and I got a beef pie, both served with so many sides and condiments they were hard to get through. Which made the toffee pudding, apple pie & custard and pint of cider even harder…

We pushed on and arrived at Once Brewed early in the evening, this was the location of the YHA we stayed at for a couple of nights whilst exploring Hadrians Wall, the Ancient Roman defensive fortifications that ran from coast to coast creating the northern border of the Roman Empire.

We were up early the next morning and set out on what was to be a nine mile hike incorporating Hadrians Wall, Housesteads Fortress and the Vindolanda archaeological site. The countryside here was stunning and we have struggled to find any pictures that do it justice, the wall itself was impressive, an amazing feat of engineering considering the terrain as it is built up and down cliffs and hills and alongside lochs and bogs, I don’t envy the Roman soldiers who had to build it all by hand.

On our way to Housteads fortress, one of the largest fortifications along the wall, we passed three mile forts, fortresses built exactly one mile from each other along the wall, they took the spacing pretty seriously with some of the fortresses in terrible strategic positions. The ruins at Houseteads were interesting as the foundations were still in place for all of the fortress’s buildings giving great insights into how the Romans built their camps. Unfortunately the weather took a turn and we got annihilated with sleet and freezing winds, Jess had the camera so the decision was made that rather than continue the hike I would run back and get the car.

It seemed like a great idea when I made the offer… If you look at the pictures above you can see they are quite hilly, running 3 miles back over that, as it turned into mud, whilst being punished by a freezing wind and rain was not as fun as I anticipated. Eventually I made it back to the accommodation, grabbed the car and went and rescued Jess so we could continue our journey.

The next stop was Vindolanda, formerly one of the largest Roman settlements in the area and an ongoing excavation site with an active archaeological team every summer. They have excavated different sections of the town and multiple layers of fortresses that were built on top of each other over the years and found heaps of artefacts that are showcased in the museum on site. It was really interesting to see the archaeological team in action and to be able to speak to them and some of their volunteers about what they were up to on the day and about their recent discoveries. After Vindolanda we drove a few miles down the road to the Roman Army Museum, a great interactive museum which gives a good insight into life as a Roman Soldier  in Britain including a recruitment talk from a centurion, a basic lessons in latin and the roman code of honour, firing a bow and a 3D movie about life on the wall. Was really good and definitely recommended, you can get a double pass and go to the museum and Vindolanda for ten pounds, so pretty cheap as well, which is great because the exchange rate just keeps getting worse.

After a delicious dinner at the Twice Brewed Inn we had our last nights sleep in our double bunk bed and continued our Northern journey. Our final stop before Scotland was Wallington, another giant estate and nature reserve which is managed by the National Trust. We went out onto the nature trails first and managed to spot a large variety of birds and finally managed to spot a red squirrel, much to Jess’s excitement. Apologies for the blurry photo, squirrels are rather speedy. We went on the river trail next in search of otters but were unsuccessful, much to Jess’s disappointment. We came back up through the grounds and gardens before fuelling up on some more scones and a quick lunch, we eat a lot of scones here, National Trust in England is a lot like if the CWA in Australia had castles. 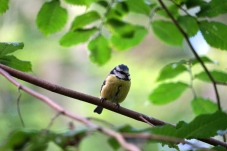 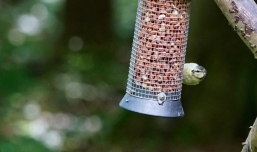 After our stop at Wallington we pushed on Northwards and crossed the border into Scotland and headed up to Edinburgh for a week of laughs at the Fringe Festival. Update coming soon.