Our first port of call in Scotland was Edinburgh for the Fringe Festival, after a quick trip up and across the border we arrived, settled into our room and headed out into the madness. During the festival and the military tattoo in August Edinburgh is ridiculous, there are six visitors for every one local, goes without saying some residents love it and others hate it, the rest rent out their apartments and make a fortune. Our accommodation had pros and cons, we were in the Edinburgh uni student residence at Old Fountainbridge Apartments, we had a small room and shared bathrooms and a big shared lounge and kitchen. Throughout our stay we only saw one person on our floor, a random naked guy in the hall… other than that we essentially had the place to ourselves which was great. The downside was that the bed was so small and uncomfortable we barely slept all week. Can’t complain too much though, location was great and meant we could walk to all of the three hundred venues if required, which meant no city driving for me. Bonus! 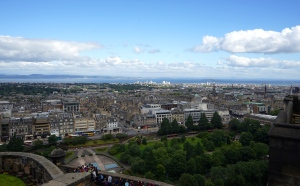 Our first gig of the festival was the Best of Irish comedy showcase at The Stand Comedy Club, it was a strong start, there were four comedians and all were really funny. We got in early and sat in the 2nd row which was great as we got to have a bit of banter with the comedians. The highlights of the set for us were Martin Mor who hosted and Caimh McDonell who basically did a set on how racist one American lady was that he met on his honeymoon and how uncomfortable he was able to make her.

After grabbing some street food in transit we continued our Irish night with Jason Byrne in the main hall at The Assembly, a giant old hall overlooking the city. We lined up super early to ensure we had good seats and managed to snag central seats in the third row third row. Apparently we were close enough that Jason picked us out as being Australians because of our alleged tans, I have never been referred too as tanned before, an unexpected perk of being surrounded by the Scottish. He quickly turned on us though and promptly smashed us in front of the audience seemingly holding us personally responsible for the crimes of our entire nation. In this case our use of the word “ranga”, it seems this is only a thing in Australia and that visiting redheads, or even redhead sympathisers genuinely hate it, we heard about it from a few comedians. It wasn’t long before he had audience members up on stage, expecting some sort of humiliation or punishment judging from their reluctance, and announced that this year was “revenge year”. This resulted in Jason Byrne in a leotard getting paddled in the testicles… Enough said. 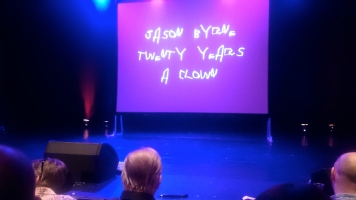 The next day started with Tony Jameson and his Football Manager ruined my life show, Tony was really funny and at times his stories were a little bit too relatable for comfort. Jess got some good insights into the game and realised that there are people out there who are much much worse than me, a good investment of a few pounds I think for that outcome alone.

We had a bit of time to spent exploring the festival that afternoon and checked out some street performers and the flier gauntlet known only as “the mile”. Basically every arts student in the UK is in Edinburgh handing out fliers for their play, which generally they are doing for free in a pub or hall. Every now and then you find something worthwhile or meet someone interesting but after the first day or so you can get quite sick off it and stop acknowledging flierers all together.

That evening we went to Steven K Amos, he was doing a work in progress show which meant he was developing his jokes and playing around with the timing and structure of his set. It meant that the show was super cheap and had lots of interaction, it was an interesting thing to participate in and showed that the comedians aren’t always as slick as they seem on tv as he had a few shocking jokes in there. The man himself was super approachable and really friendly, we caught up for a chat after and I got a signed book, we also saw him around the festival a few times afterwards and he said hi which was nice.

After Steven K we decided to check out Stand Rising which was on immediately after in the same venue. It consisted of four up and coming young Scottish comedians; Liam Withnail, Gareth Mutch, Robin Grainger & Gareth Waugh doing fifteen minutes each. The guys were all in their early 20s and none of them have hit it big yet, however a couple of them have built pretty good reputations. Considering they had a smaller audience they were smashing it, really funny with heaps of interaction and banter with the audience. We really enjoyed their set and recommended a few other people to go and watch it later on in the festival. 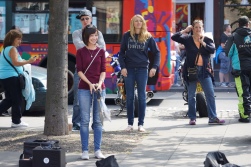 One of the other things massive at Edinburgh is street performance, there are some amazingly talented acts that we caught around the city but didn’t really have time to stop and check out. On our way back from lunch we stopped to watch a Canadian guy because we had time to kill, he was pretty bad, no one laughing at his jokes and took forever to build up an audience and get into his routine. Just as we were saying how rubbish he was and planning to leave he called Jess out of the crowd to volunteer… rookie mistake. Watch the video below to see how well that worked out for him.

After lunch and Jess’s recovery from her performance we headed out to Blam! – Worst decision ever. It was way too theatre for us, historically we had never been massive theatre people but we enjoyed Book of Mormon so much in London that we thought we’d give it a shot. Taking nothing away from the performers themselves, they were great athletes, but the show wasn’t for us. It consisted of for guys in an office set who talked like minions and jump around pretending to fight for an 80 minutes. There were a wide range of reactions for the crowd, a constant stream of people were walking out from about the tenth minute, others like us looked a bit confused and yet the broad majority loved it and gave a standing ovation when it finished… If only we were more cultured haha

Our day recovered dramatically with Daniel Sloss up next in one of the bigger venues of the festival at the conference centre. He did an absolutely amazing set, best of the festival for both of us. Won’t go into it too much as it will ruin the set as it is all new material and he will be touring it soon, we definitely recommend going to watch him if you get an opportunity. He was really nice as well as he recommended other comedians and venues which no one else really did. He lives in Edinburgh and is really well liked and respected by people who live there and by other comedians, mostly he was just really, really funny.

After his set we walked to the Stand Comedy Club for Set List, which is comedians under pressure, they have to improv sets to random things that pop up on a screen. There were a couple of big names who killed it, a young girl doing her first festival set who struggled a bit but got good crowd support, particularly from the other comedians in the venue.The Pyjama Men, an improv duo from America, seemingly had no idea what was happening but somehow managed to be hilarious and the guy who turned up late so was last on nearly got in a fight with angry fat Scotsman in front row. This guy was miserable and sat in the front row glaring down everyone who came on stage, was pretty aggressive and personal with his heckles and everyone would of been pretty happy if he wasn’t there. Made it interesting though I guess. Stopped in for some 1am maccas on the way home and then our day was done.

The next day Jess went off to explore Edinburgh castle which is up on a hill overlooking the city, with the festival and military tattoo on during our stay there were so many tourists around I decided to give it a miss, the plummeting Australian dollar helped with the decision making as everything is getting ridiculously expensive.

We reunited later that afternoon and headed to the Steven K Amos Talk Show. It was really interesting and gave a lot of insight into what happens in the background at Edinburgh as well as giving us a lot of festival history. Guests ranged from up and coming comedians, superstar headliners, ageing legends, managers and venue owners. It gave a really good picture of how the festival worked and why it has become such a cultural phenomenon. It wasn’t that funny though.

Our final comedian of the festival was Ed Byrne, as always he was very funny but the set was dominated by the fact that he was haunted by a balloon. The night before had been the 20th anniversary of the venue so they had balloons and streamers and things, one sad helium balloon was left which halfway through the set slowly descended from the rafters and began to hover a meter above the stage. After distracting Ed and the audience with it’s antics Ed got sick of it and grabbed it, took it across the stage and through it out the door. From the wide angle we were at we could see behind the curtains on the door side, the balloon got stuck in the doorway and slowly started floating back across the stage, a metre off the ground directly at the comedian. He didn’t know what to do, the entire audience were in hysterics so he grabbed it and burst it, admitting he could never create something that weird again in his life and almost having a meltdown. Was perhaps funnier than it sounded. The rest of his set was really good too but the evil balloon stalking him around the stage was definitely the most memorable.

For our last evening we decided a break was needed from walking around with tens of thousands of people and spending all of our time lining up so we went to the movies and watched The Man from UNCLE, movie was great and a good opportunity to have a break from the madness (and to eat four snickers for a pound). The next morning we headed up into the highlands to begin the next leg of the journey.

Sorry for the lack of photos on this post, in most of the venues you weren’t allowed to take any photos at all, even when acts weren’t on. I guarantee that the next post will have more amazing photos than you can deal with as the highlands and isle of Skye were incredible.

As always thanks for reading!!